May 10, 2010
Saturday, Calvary Youth went hiking :) Most of our youth group was there. Some had to work :( But here are some pictures (with captions lol) of what happened. 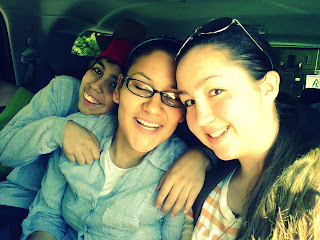 Miguel, Felipa & I in the car (Uncle Jeffrey driving)
We had to stop to get the parking passes or something.
Lol our car was pretty fun! 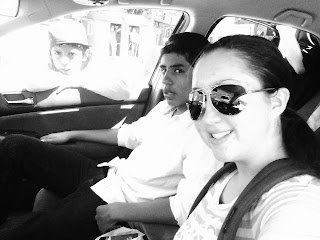 Lil' Miguel, Michael & I...We got outta the cars and chilled for a few minutes while they got the parking passes. Lol This was in Jer's car. Me in the driving seat ;) Hahaha! On the way back down the mountain, they played chinese fire drill...LOL it was so funny watching them! 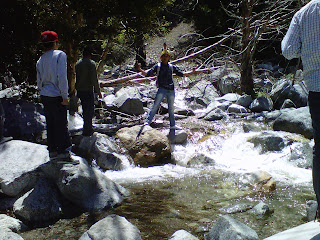 We didn't stay to the trail the first half of our hike UP!
We climbed rocks and jumped from on side to the other...
Several guys took risks and ended up falling into the water ;)
Fun stuff & major work out lol 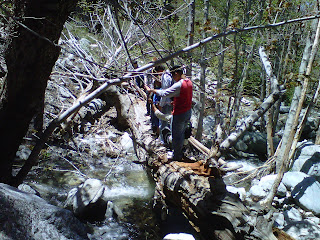 This tree had the BIGGEST ants on it, and we were right over the stream with tons of rocks. We would have died if we fell. Lol And trust me, I felt like I was going to fall a few times ;) But I had to hold on to Moses, Jonathan or Miguel the whole time ahaha I did NOT want to fall lol! Anyways, this was where we had a group pic...Uncle Jeffrey got it on Steven's camera. 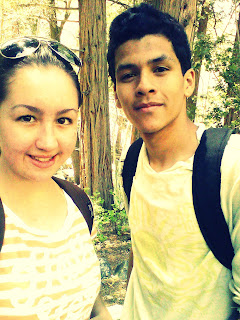 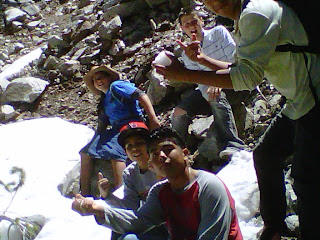 A few of us were WAY ahead of the group and decided to take a detour :) HIKE to the snow! Which was on the other side of where we were...we had to go down (& then climb back up after) a steep hill, climb over rocks, get dirty(er) & eat/touch/throw snow :) Had a blast!
Lauren, Samuel, Miguel, Jonathan, Moses, & Me (taking the picture lol) 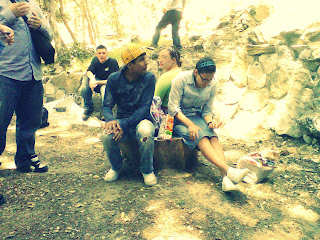 This is where we stopped to eat and chill out. And also where we decided to head back home...it was already well past 1 o'clock. **Moses & Jonathan V. went & filled up their backpacks with snow so we could put some of our drinks in there :) So that was their 2nd trip to the snow patch lol 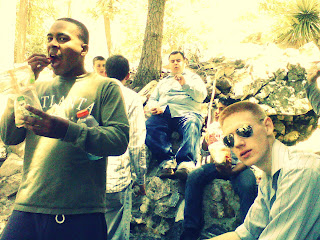 Yes, we are eating candy...You gotta problem with that? 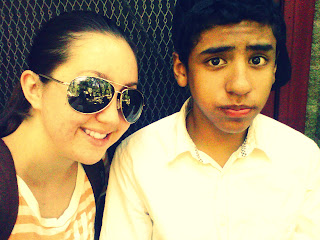 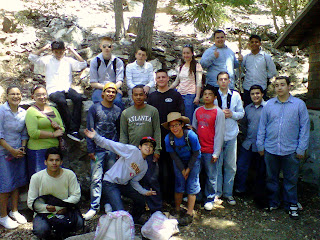 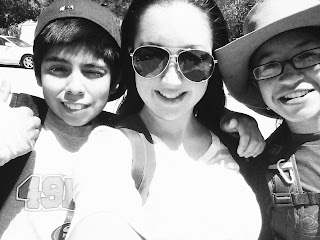 Miguel, me & Lauren at the end of the hike :) Walking to the cars!
....We took another group shot (also on Steven's camera)...
About 10 of us ran down the mountain :) Yes, I said RAN. Lol I think Moses fell once but got saved by a tree lol we screamed like we were running the aisles (which is what it felt like pretty much...except there were rocks haha!) Talk about work out! I was so sore (Still am!) Lauren ran too lol Thas' my girl ;) 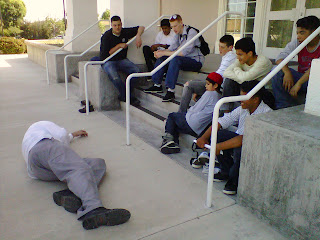 Bro. (Uncle) Jeffrey Rowell laying on the ground, in front of the church,
after his team won the scavenger hunt :) Woo woo!!!
His team:
Justin, Me, Miguel, Felipa, Brittani, Moses, Jonathan B., & Lauren :)
*ALL pics were taken on my phone (I have a pretty good camera phone lol) & edited on picnik.com :)*

Also, another apology, I am sorry I'm not super detailed like Nicole & Bethany Wakefield are on their blog! LOL

This is one of my favorite pictures from the whole trip... Overlooking the city of Puebla


Walking down the streets!
Here are a few of us girls on Friday night ready for the service! Me, Sofia, Emily, Rachel, Brittany, Karoline, & Breana
I love these two girls :) Emily & Karoline Awesome girls to hang out with!
Shy & bashful Leslie lol She really is quiet haha
Our first service there was so powerful! During song service, we had a strong move of God! People were just crying & praying! So touching
During song service.. You can see that the metal door was pushed open (it was so hot inside) and allowed for more room to sit PACKED HOUSE!
We haven't even got to the preaching yet and people were in the altar!
Bro. Pedro preaching! A younger guy from our gro…
2 comments
Read more

August 23, 2010
You know, I would be laughing so hard if a guy said any of these to me lol but I still think it would be kinda cute :p haha!

So without further adieu, I give you the Pentecostal Pick Up Lines ;)

*my favorite ones will be in italic :p lol*

1. Nice bible
2. Do you need help carrying your bible? It looks heavy.
3. If I had to choose between a romantic date with you or a night with the fellas… I would sit at home and read my bible.
4. Is that a thinline, duo-tone, compact, ESV Travel Bible in your pocket!?
5. Why don't I have a bible dictionary? Well, I dont really need it.
6. What, this here? Oh.. that's my study bible - it’s a little bigger but I can handle the extra spiritual and physical weight.
7. I've prayed about it and God wants you to go out with me.
8. My friend told me to come and meet you, he said that you are a really nice person. I think you know him. Jesus, yeah that's his name.
9. God told me to come talk to you
10. Marry me.
11. The Word says "Give drink to…
6 comments
Read more

October 05, 2017
Has it really been almost 2 years since my last post? So much has changed.

(Honestly, I am updating my blog because I like to reflect back on how far God has brought me. Forewarning, don't read if you don't want to take a look into my life the past year. This blog has many memories and I want to add on to it.)

2 years seems like a lifetime ago. I was hurting, broken-hearted, uprooted, and quite frankly, needing God more than ever. I questioned everything I was taught and needed answers, but thankfully, there was one thing I knew for sure...

God had plans and He would be all I needed.

Fast forward to October 2017 and I have lived in the state of Washington for a year, moved into my dreamy studio apartment in August, and I work in beautiful northern Idaho making & working more than I would have in Southern California. Who would have thought? Little Miss Meagan, moving 1.300 miles away from her family because God opened doors and said, "Come."