SURPRISE!!!!!!!!!
Get this.. my Uncle Jerry Sr. thought he was going to preach "Family Weekend" at Jerry Jr.'s church in Yuma. Lol. He thought it was just the church and their families. He called his son (Jerry Jr) and asked if Aunt Marg and Uncle Babs could come (remember, they didn't know it was the Rowell family that was actually there) so Jerry Jr said OF COURSE! :) LOL we had to keep the surprise from Uncle Jerry Sr and Aunt Loretta.
(Waiting for the wonderful couple to arrive)

My cousin Jerry Jr pretended like it was a normal service and when he gave the signal, we stood up and faced Uncle Jerry Sr and Aunt Loretta. They were soooo shocked! :) We started singing "Happy Anniversary to you" to the tune of  the "Happy Birthday" song. The service was sooo beautiful. They played their wedding song and with a little smooch at the end, that ended the service and time to go grub ;) ahahah 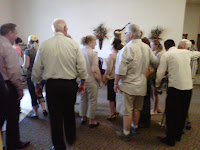 There were, I think close to 100 lbs, chicken and ribs to feed the 100 Rowells lol. Brother, this family can eat :) hahaha it was delicious.
(Cousins-Jonathan, Michael, Justin, Mason, Shelby, Me)

﻿Then there were presentations :) Videos of past family reunions (camping, fishing, surprises, singing, playing.. etc) Jerry Jr sang "Baby We Made It" in honor of the 45 years of marriage Uncle Jerry & Aunt Loretta have had.

After this wonderful family time, we went and had MORE family time!!!!! The boys/men (Uncles, cousins) and I (the only girl) went to go shooting :) Sadly, I don't have the pictures/videos of that. We had a blast (no pun intended) LOL. 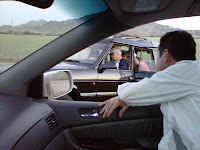 From there we went to Aunt Edna's (Papaw's sister) vacation house in the desert.. The "band" played and we heard great singing :)

August 23, 2010
You know, I would be laughing so hard if a guy said any of these to me lol but I still think it would be kinda cute :p haha! So without further adieu, I give you the Pentecostal Pick Up Lines ;) *my favorite ones will be in italic :p lol* 1. Nice bible 2. Do you need help carrying your bible? It looks heavy. 3. If I had to choose between a romantic date with you or a night with the fellas… I would sit at home and read my bible. 4. Is that a thinline, duo-tone, compact, ESV Travel Bible in your pocket!? 5. Why don't I have a bible dictionary? Well, I dont really need it. 6. What, this here? Oh.. that's my study bible - it’s a little bigger but I can handle the extra spiritual and physical weight. 7. I've prayed about it and God wants you to go out with me. 8. My friend told me to come and meet you, he said that you are a really nice person. I think you know him. Jesus, yeah that's his name. 9. God told me to come talk to you 10. Marry me. 11. The Word say
6 comments
Read more

October 05, 2017
Has it really been almost 2 years since my last post? So much has changed. (Honestly, I am updating my blog because I like to reflect back on how far God has brought me. Forewarning, don't read if you don't want to take a look into my life the past year. This blog has many memories and I want to add on to it.) 2 years seems like a lifetime ago. I was hurting, broken-hearted, uprooted, and quite frankly, needing God more than ever. I questioned everything I was taught and needed answers, but thankfully, there was one thing I knew for sure... God had plans and He would be all I needed. Fast forward to October 2017 and I have lived in the state of Washington for a year, moved into my dreamy studio apartment in August, and I work in beautiful northern Idaho making & working more than I would have in Southern California. Who would have thought? Little Miss Meagan, moving 1.300 miles away from her family because God opened doors and said, "Come." This plac
Post a Comment
Read more

The Struggle is Real

February 15, 2016
I am not usually the person who spreads their woes on Facebook, Instagram, or blog. Tonight may be the exception but I will refrain from letting emotions get the best of me. We are all facing trials. Whether you are 16 years old and tempted to cut your hair, 18 years old and thinking about leaving the church since you are technically an 'adult', 21 years old and being pressured to drink, or 24 years old and struggling with hurt and depression. The struggle is REAL! The truth is, we are all at different points in our walk with God and, believe it or not, the trials are ALL God-ordained. They have been put in our life specifically for us and to make us more like Christ. The struggles you are facing are a test of your faith and love for God, but they are also there so you can learn from your mistakes and help others when they go through the same trial. Honey, if you are dealing with hurt, I could quote scripture after scripture giving you encouragement and to cast your car
Post a Comment
Read more