Being a Trophy in Hell

August 03, 2013
Last weekend, my dad and I ran sound for a Spanish concert/service "Creere". Even though I AM 1/2 Mexican, I don't speak Spanish lol how sad is that!? They had a translator for the services though so I was able to pick up bits and pieces of the preaching or else I would have been lost! Bro. Bobby Jimenez was preaching about believing (Creere means I believe). One phrase I was able to hear over the roar of worship, was "I AM NOT A TROPHY IN HELL!" It really stuck with me Saturday night and all of Sunday.

I'm going to be honest, I have been struggling with discouragement,
hurts, being prayerless, and a lack of worship.

I was being lazy about prayer; even though the Bible has a couple things to say about it..

Acts 6:4 "But we will give ourselves continually to prayer, and to the ministry of the word."
Romans 12:12 "...continuing instant in prayer;"

I was always running sound or on the praise team so I felt like I needed to focus on those tasks instead of being in the altar and worshipping. I was discouraged about not being used by God. I was hurt over a lot of things..  There was a CONSTANT struggle in my heart and my mind. Almost like a war inside my head.. It was exhausting and it made me weak spiritually. It's like I was fighting with everything-using the last drops of prayer, worship, and anointing I had left in me. Eventually that supply runs out if you don't keep refilling it.. I was at the point of giving up (several times), but every time I prayed to God and said "I need strength, some encouragement... I don't WANT to give up this fight" .. He always answered my prayer. An elder would walk up and say how much they appreciate or love me. I would get a hug. There was some spiritual strength... so I had a few more drops to use.

What I didn't know... The devil was already polishing my spot on a shelf in hell. He figured eventually, I would be too weak, get too exhausted, and give up. He knew I didn't have a solid prayer life, I was hardly worshipping, he would dig at the scars on my heart and place more discouragement and lies in my head.

So at that Saturday night service... I realized, the devil thinks I'M HIS TROPHY. It weighed on my mind the next Sunday morning service. I wanted to go up in the altar and worship but I didn't. Sunday night I had a made up mind, at one point in this service, I'm going to show the devil that I'm NOT his trophy!

That is exactly what I did. We were on the platform for choir and as we ended a powerful song, I thought "worship now while I have the chance." I ran the aisles and once I got back to the altar, I let God take over and I worshipped! With everything that I had! I gave it my all! I needed the breakthrough and God came into the sanctuary and blessed me with a fresh anointing and sparked a fire back in my heart.

Take that devil! I'm not your trophy! 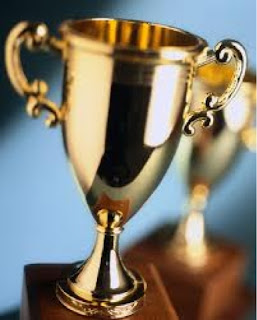 Don't be a trophy in hell!
Pray! Fast! Worship!

May the fresh oil be applied and you over flow!

Jennifer Connell said…
You go girl!
I know what it's like to have fought discouragement, and like you said, even being distracted by doing things. Good things, like singing at church, or being involved. But I have found that if we don't have prayer, we don't have anything. When prayer becomes a priority and a delight, it will change your life. Thanks for posting this; keep the faith and know there are many others serving God, too! ;)
-Jen Connell
August 28, 2013 at 9:54 PM

August 23, 2010
You know, I would be laughing so hard if a guy said any of these to me lol but I still think it would be kinda cute :p haha! So without further adieu, I give you the Pentecostal Pick Up Lines ;) *my favorite ones will be in italic :p lol* 1. Nice bible 2. Do you need help carrying your bible? It looks heavy. 3. If I had to choose between a romantic date with you or a night with the fellas… I would sit at home and read my bible. 4. Is that a thinline, duo-tone, compact, ESV Travel Bible in your pocket!? 5. Why don't I have a bible dictionary? Well, I dont really need it. 6. What, this here? Oh.. that's my study bible - it’s a little bigger but I can handle the extra spiritual and physical weight. 7. I've prayed about it and God wants you to go out with me. 8. My friend told me to come and meet you, he said that you are a really nice person. I think you know him. Jesus, yeah that's his name. 9. God told me to come talk to you 10. Marry me. 11. The Word say
6 comments
Read more

October 05, 2017
Has it really been almost 2 years since my last post? So much has changed. (Honestly, I am updating my blog because I like to reflect back on how far God has brought me. Forewarning, don't read if you don't want to take a look into my life the past year. This blog has many memories and I want to add on to it.) 2 years seems like a lifetime ago. I was hurting, broken-hearted, uprooted, and quite frankly, needing God more than ever. I questioned everything I was taught and needed answers, but thankfully, there was one thing I knew for sure... God had plans and He would be all I needed. Fast forward to October 2017 and I have lived in the state of Washington for a year, moved into my dreamy studio apartment in August, and I work in beautiful northern Idaho making & working more than I would have in Southern California. Who would have thought? Little Miss Meagan, moving 1.300 miles away from her family because God opened doors and said, "Come." This plac
Post a Comment
Read more

The Struggle is Real

February 15, 2016
I am not usually the person who spreads their woes on Facebook, Instagram, or blog. Tonight may be the exception but I will refrain from letting emotions get the best of me. We are all facing trials. Whether you are 16 years old and tempted to cut your hair, 18 years old and thinking about leaving the church since you are technically an 'adult', 21 years old and being pressured to drink, or 24 years old and struggling with hurt and depression. The struggle is REAL! The truth is, we are all at different points in our walk with God and, believe it or not, the trials are ALL God-ordained. They have been put in our life specifically for us and to make us more like Christ. The struggles you are facing are a test of your faith and love for God, but they are also there so you can learn from your mistakes and help others when they go through the same trial. Honey, if you are dealing with hurt, I could quote scripture after scripture giving you encouragement and to cast your car
Post a Comment
Read more